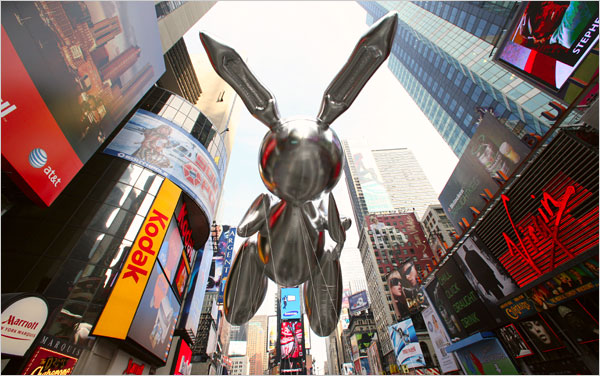 Were I Jeff Koons, I’d be the happiest artist on earth. I don’t know how exactly this happened, but his Mylar bunny has become a part of the Macy’s Thanksgiving Day Parade stable of giant cartoon balloons. Koons, of course, has built his career by zigzagging across the boundary between fine art and kitsch. He has made cuteness — as variously represented by puppies, porn stars, and balloon flowers — his calling card. And now he has taken a piece of fine art (How do we know that’s what it is? Well, it has no TV show, nor Toys R Us product line, therefore it must be art.) and inserted it into the arena of extreme kitsch that is the parade.

I was already impressed when I learned that Hello Kitty, herself an occupant of a particularly odd boundary zone, had joined the parade. But her debut was upstaged by Koons’s bunny. What next? My guess would be a Takashi Murakami balloon.