Do Hurricanes Have Aftershocks? 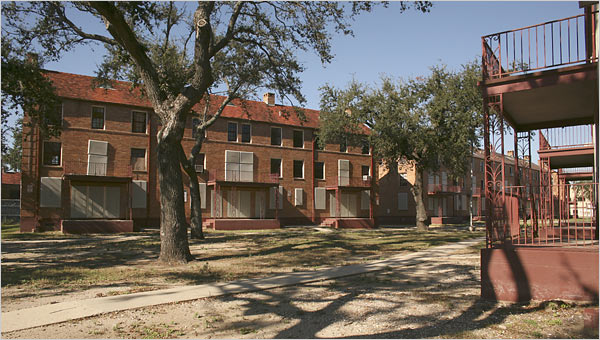 No, I’m thinking of earthquakes.

Still, it seems like destructive storm surges from Katrina keep hitting the city of New Orleans. I’m referring to the bulldozing of some 4500 units of public housing by our federal department of Housing and Urban Development. Nicolai Ouroussoff at the New York Times has done a good job of defending the architectural merit of the buildings in question. But this is one of those things that isn’t really about architecture per se. It’s about the cynicism and callousness with which the Bush administration has dealt with the storm and its victims. Here’s a paragraph from a column I wrote for Metropolis a year ago that sums up my feelings about the demolition now in progress:

You would think that the federal government would be down there, spearheading rebuilding efforts, cutting through red tape, and awarding big contracts to some of those modular-home builders. But the most ambitious initiative from the Feds so far is the Department of Housing and Urban Development’s controversial plan to demolish 4,500 units of New Orleans public housing and replace them with mixed-income developments. Parts of the demolition would be done under the auspices of HOPE VI, a Clinton-era program intended to break up the entrenched pockets of poverty in massive Chicago-style housing projects. But here it seems like a perversion of the program’s goals—if not flat out criminal—to demolish structurally sound buildings in the midst of a catastrophic housing shortage. It’s a decision that reinforces the widespread belief that the federal government’s failure to aid the city’s abandoned underclass in the days following the hurricane was due to something worse than incompetence.

That’s from an America column in the February 2007 issue of Metropolis. For another story that isn’t about architecture per se, take a look at my current Metropolis column on Madison Square Station.