"She scares the bejeebers out of me…"*** 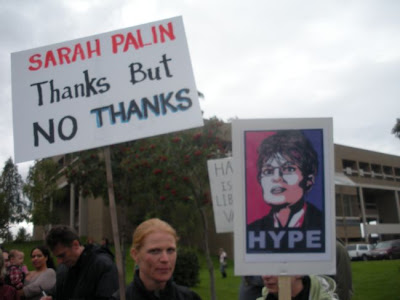 The photo above was taken by a blogger named LaurainAK. at yesterday’s anti-Palin rally in Anchorage, organized by a group of local women over coffee. Attendance, according to the blogger Mudflats, was comparable to attendance at the official pro-Palin rally. The “HYPE” poster absolutely made my day. My hat’s off to whoever did that nifty graphic, and also to the coffee-drinking women of Anchorage.

***So says Laura Chase, Palin’s campaign manager on her first run for mayor of Wasilla, as quoted in today’s NY Times. She scares the bejeebers out of me, too, Laura.