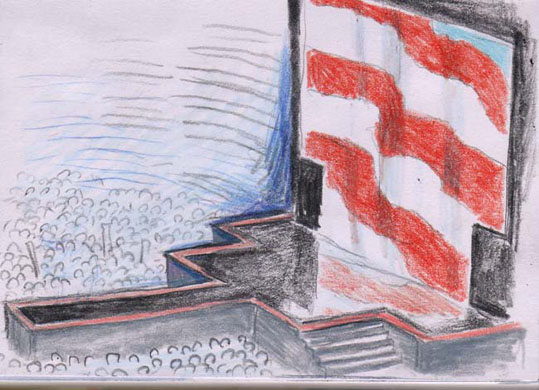 The stage at the Republican convention as drawn by Steve Bell

My favorite coverage of the conventions has been provided by Guardian cartoonist Steve Bell. He’s attended both conventions and his daily sketchbook is treat. His description of how the stage was altered for John McCain’s particular needs cracked me up:

The stage in the convention centre has developed an alarming growth that thrusts into the hall. This is because John McCain feels more at home in intimate town hall-style gatherings and is not comfortable with big speeches read off the teleprompter

(Wonkette remarked on the stage’s peculiar thrusting quality as well.)

I’ve been trying to watch the conventions with a design critic’s eye and I think, overall, the Republican’s use of one jumbo screen was more effective than the Dem’s multi screen approach. But, of course, the Reps always do the Orwellian thing better. On the other hand, if they mistakenly project the wrong image, as they did behind McCain’s speech last night, it’s an even bigger embarrassment.