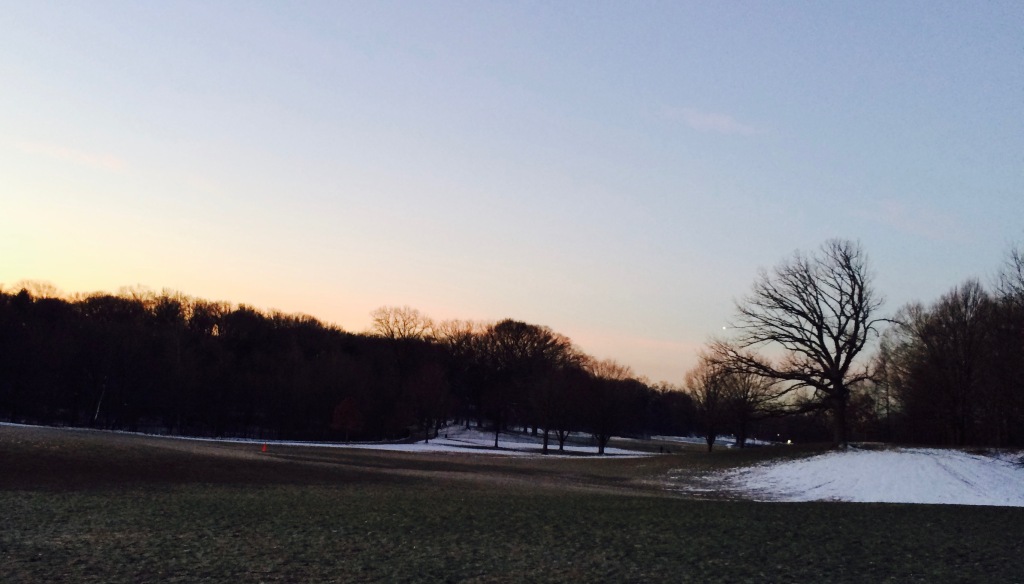 One of the things I’ve been working on lately is trying to understand Prospect Park for what it is, a work of engineered nature.  I’ve been trying to figure out how to write about a place I visit daily, how to analyze a familiar landscape that was willed into being, conjured from swampy ground and farmland,  by a 19th Century power broker named James S.T. Stranahan and the legendary design team of Calvert Vaux and Frederick Law Olmsted.

I go to the park most mornings with my dog and let him run off leash in the Long Meadow, a mile-long grassy expanse ringed by trees carefully positioned to keep your eyes from wandering too far, to keep you from sensing the city beyond.  Usually I arrive before sunrise and, as I play fetch or Frisbee, I watch the sky gradually fill with light.  Sometimes I run with the dog (on leash) along the road that encircles the meadow in a hilly, three mile loop.  Always I marvel, not just at the beauty of my surroundings, but at the human ecology.  Everyone — every possible kind of person — visits the park to exercise, or relax, or play.  And everyone, for the most part, peacefully co-exists.  On a warm, sunny weekend, the park looks like a children’s book illustration of America, the melting pot country, a  place in which  — no matter where we came from or how we look — we all belong.

This morning, I ran the loop around the park with the dog, stopping midway for a fetch break in the Long Meadow.  We were finished with our workout and on our way out of the park when I heard  shouting.  A bicyclist, one of the Spandex clad racers, mostly men,  who zoom around the park in tight formation, like fighter jets, was yelling at a women for allowing her unleashed dog to dart onto the road.  Initially, I was sympathetic.  Clearly, it’s dangerous  to allow an unleashed dog anywhere near the road.

The woman, who spoke with an accent, responded by scolding the bicyclist for failing to slow down for pedestrians in a cross walk.  She had a point, too.  When the roadway was repaved early last year, they installed very wide, conspicuous crosswalks at each major entrance to the park along with pedestrian crossing signs.  I can count on the fingers of one hand the number of times a bicyclist has even slowed  for me.

Admittedly, this is the exact spot where the park’s mystical harmony breaks down.  This sort of exchange between the Spandex crowd, who behave as if the roadway were a velodrome, and  other park users happens regularly.  The roadway and, especially,  the crosswalks are contested territory.

Then Spandex Man yelled at the woman:  “Go back to Cuba!”

And I was stunned.  Because his remark, gratuitous and ugly, introduced the hate-filled rhetoric of Trumpism into the park.  It seemed like a violation of the social contract, of the rules we live by in our incredibly diverse city and in our public places.  So, as Spandex Man sped away,  I yelled at him, full volume,  “Asshole!  We don’t do this in Brooklyn!  You asshole!!!”

I was angry.  Enraged.  And really loud.  Every emotion  — the shock, the fear, the outrage — that I’ve been sitting on since election day, or, maybe, since the whole Trump debacle began, came rushing out.  In truth, there’s a rich Brooklyn heritage of insult hurling,  and ethnic tensions occasionally boil over,  but Spandex Man’s comeback didn’t seem to come from that ur-Brooklyn stewpot.  Instead, this was an entitled man on an expensive bike whose default response was: “Go back to….”  His presumption — “I belong here, but you’re a foreigner.”  — rattled me.  It’s this exact thing, this noxious, pea-brained,  reflexive resentment that Trumpism has made acceptable to publicly express.  Lately it seems to be everywhere.  But it shouldn’t be in Prospect Park.

To me, the park is a sanctuary, a place where the dumb, racist, xenophobic political rhetoric of our present political moment has no standing.  The park is a preserve, not just of nature, but of civilization.  Prospect Park is  a microcosm of the world as it should be, as I believe most of us in Brooklyn would still like it to be.