My story about the city of the future, which wound up mostly being about Almere in the Netherlands, is  in the current issue of Travel + Leisure.  And while Almere,  founded in the 1970s,  is  an extraordinary open-air museum exhibiting successive decade’s visionary schemes, it leaves something to be desired as a city. Initially my interest in stillspotting nyc, a project by the Guggenheim Museum, was motivated by the research I’ve done for my book on silence.  My sense is that finding reservoirs of silence within the city is more essential than going off to some remote, What I’ve noticed in recent days is that a lot of people have found my website by searching for 9-11 photos.  I don’t have any.  I prefer to commemorate the life of the World Trade Center, rather than its death.  I prefer to remember the Twin Towers as an out-sized architectural conceit that, by the time of its destruction, In part because Travel + Leisure asked me to figure out what the term “city of the future” might mean at this juncture (see the upcoming October issue) and in part because Metropolis asked me to review Talk to Me at MoMA (in the September issue,

Yesterday morning, I glanced at the weekly email newsletter from The Architect’s Newspaper and saw Doug Garofalo’s name.  Without really reading the headline, I clicked on the link and was stunned to find myself staring at his obituary. Back in 2003, I began the 14,000 mile road trip for my book, The Perfect $100,000 House, at a two week intensive workshop on designing and building houses at a school in Vermont called Yestermorrow.   The formula was simple; in the morning we learned to design and in the afternoon we learned to build. Last night on Greene Street, this truck covered with words by artist Barbara Kruger was parked for a few hours.  It was about to depart for Kansas City, the first stop on a long road trip  cooked up by painter Eric Fischl and his crew.  The project, America Now and Here, 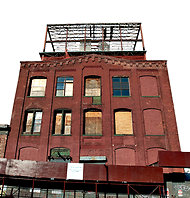 In early 2006, after a meticulous review, the city filed a series of civil charges against Scarano in an administrative court,