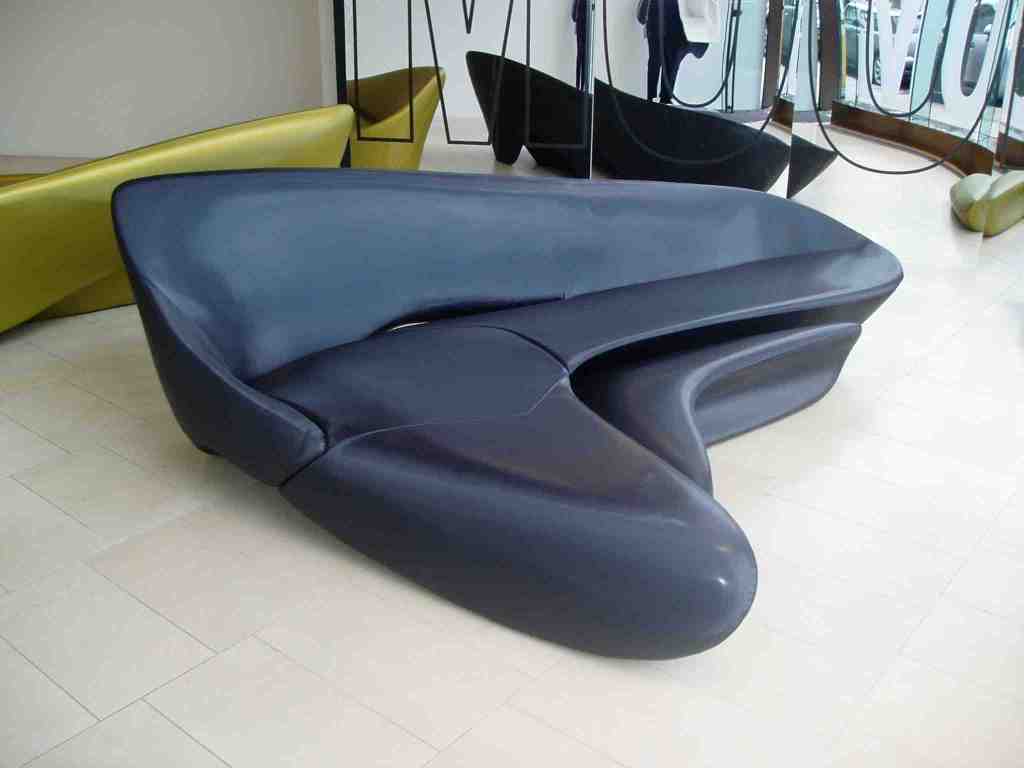 Confession:  I have still never set foot in one of Zaha Hadid’s buildings.  Nor have I ever written about her except in passing.  I think I met her once, briefly, at a conference where we were both speakers, but if the discussion went beyond the bare minimum, I have no recollection of it. Once, however, in 2007, I had an intriguing  conversation about her with a London pal and wrote about it for my House & Garden Magazine blog.  I thought it would be worth re-posting here as a sort of obit.

London is Zaha Hadid’s town. During the week of the Design Festival she seemed omnipresent. At the opening ceremonies, she was awarded the festival’s first medal. Her installation, Urban Nebula, an sinuous hunk of black matter sat on the pavement outside Royal Festival Hall ostensibly blurring “the boundaries between architecture, design, engineering, sculpture and fantasy.” Her boomerang shaped sofa (above) was in the window the B&B Italia shop on Brompton Road and her Aqua table, a flat surface with chubby polyps for legs, was executed in marble by Established & Sons and displayed at the firm’s big bash high atop a pillar, like Nelson in Trafalgar Square. To be fair, all the furniture on display at that particular event were up on pillars, perhaps so you couldn’t look closely enough to see which were truly marble and which were executed in some sort of resin. In any case, the Established & Sons party was the first design event I’ve ever attended that featured a well-guarded VIP section. Party goers kept shouting in my ear, “Zaha’s here. Have you seen her?” Well, no. I could only assume that she was somewhere on the other side of the velvet rope.

I didn’t see Zaha at the party, but I did see the Zaha show at the Design Museum. It was better than the one the Guggenheim mounted last year, in that it was smaller, more focused, and more logically arranged. The exhibit made a strong case for Hadid as a real architect showing her handful of built works and also an impressive roster of works in progress including a lot of exotic looking buildings in Dubai, Abu Dhabi, and Guangzhou and the rather lovely London Aquatics Centre, part of the grand scheme for the city’s 2012 Olympics.

Late in my London stay, I had a beer with Lucas Dietrich, an editor at Thames & Hudson, who was showing me how his neighborhood, the once seedy King’s Cross area, was being reborn. He referred to Hadid as the “hero architect” of the moment, maybe even of our time. And when I questioned that description he challenged me: who, if not Hadid, was the hero architect?   And I found it hard to answer, in part because I don’t really buy into the hero concept. I’m not sure, at this moment, that there are any heroes, not in general, and especially not in architecture. Gehry has lost his luster. Ditto Koolhaas and Libeskind. Maybe Foster, but while walking around London it occurred to me that his firm must do scores of unremarkable buildings that never get published and that we never really hear about; Foster may be too big to be a hero. So maybe Lucas was right, maybe Zaha—a women, an expat Iraqi, a genuine iconoclast—is a hero, even the hero.

Of course, by the end of the beers we had both admitted to never having set foot in one of her buildings. Lucas urged me to book a cheap Ryan Air flight to Germany so I could visit her BMW Central Building in Leipzig. And for a moment it seemed like a reasonable idea because, despite her ubiquity in London, the only fully executed Hadid work with which I’d had close physical contact during my stay was that spline-curvy sofa. And while I’m reserving judgment on Hadid’s architecture until I actually experience her buildings, as a furniture designer she’s certainly not my hero.