“And then, in what may be the strangest drive of the trip, I head west and south to Mt. Rushmore, accompanied along the way by a swarm of bikers that grows thicker as I get closer to the monument until, on the final approach road I feel like a float in a parade. In my Volkswagen, I am the only non-biker in a stream miles long. I pull into   a concrete parking garage that works like a woofer, amplifying the thrum of thousands of unmuffled engines.

“Outside, Washington, Jefferson, Teddy Roosevelt and Lincoln look on impassively at a plaza filled with black leather vest wearing family groups, Leathernecks Corpsman and Leathernecks Wife, patrons of Morrie’s Place and fans of George Strait. What would Thomas Jefferson make of this scene, I wonder, as I search his stone face for any sign that he regrets penning that thing about the pursuit of happiness.”

This morning I reread the chapter I wrote about South Dakota in my 2006 book, The Perfect $100,000 House.  The book is the account of the epic road-trip I took around the country in 2003,  in pursuit of a house I could afford in a place I wanted to live.  Ultimately,  that wound up being a studio apartment in downtown Brooklyn,  which isn’t exactly the way the book was supposed to end.

It wasn’t until I was interviewed by a women’s magazine prior to publication that I figured out what I  was supposed to have done.  I should have fallen in love with some architect  along the way and settled down with him, thus providing the kind of satisfying payoff that would sell loads of books.   I kept telling the interviewer stories about, you know, modular construction and she kept asking:  Didn’t anything else happen,  maybe something you didn’t include in the book?

(By contrast,  Elizabeth Gilbert’s Eat Pray Love came out the same year and its narrator — every bit as unmoored as I was — managed to find love and some happily-ever-after in Bali.  Her book was a best seller and she was portrayed in the movie by Julia Roberts. )

I wanted to revisit what I’d written about Mount Rushmore,  which I took in along the way.  I’d driven through South Dakota mostly because Yankton, SD was, in 2003,  the US city with the lowest median home price.  Seemed important to check out the real estate there.  And then I spent a day hiking in the Badlands and, eventually,  dropped in to see the state’s most famous hunk of Americana.   My arrival in South Dakota, however,  coincided with the Sturgis Motorcycle Rally, in which half a million bikers descend on an otherwise unremarkable spot in the western part of the state.

The bikers, mostly on Harleys,  were the most memorable part of my visit to Mount Rushmore.  The monument itself was underwhelming.  While the heads of the presidents are massive,  some 60 feet tall,  and impressively blasted into the side of a mountain (one the Sioux nation considers sacred),   you only can view them from a distance.  Compared  to the scale of the mountain, over 5700 feet,   they’re small,  like gargoyles atop a cathedral. 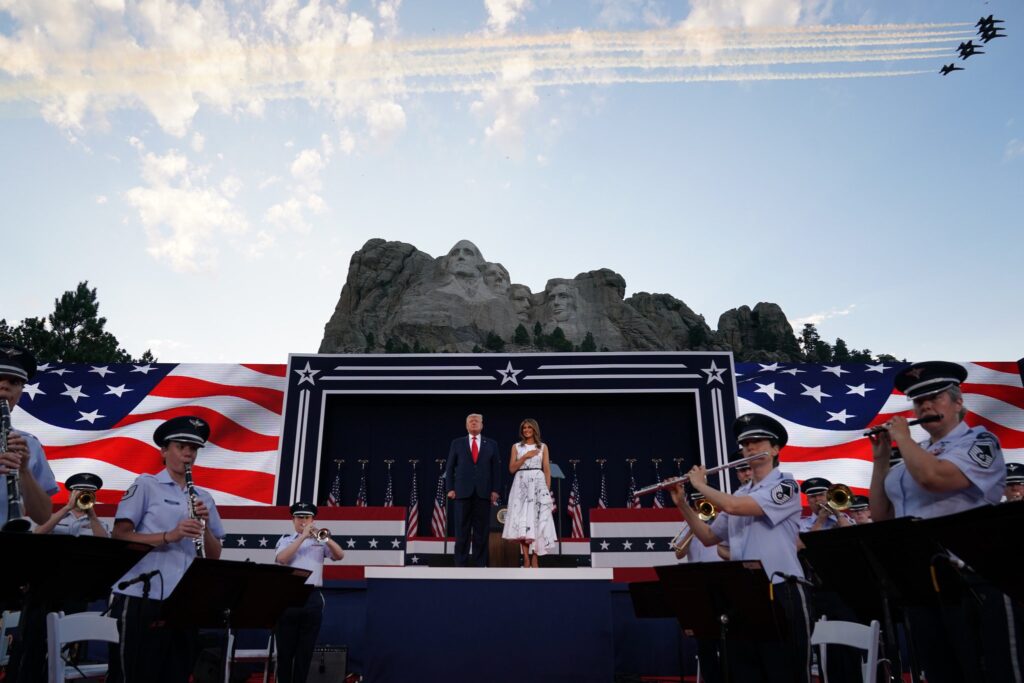 But the peculiar scale of the Mount Rushmore presidents,  the way the carvings loom above thousands of feet of what is, effectively, white space,  made them perfect for President Trump’s purposes.  He was able to neatly insert himself into the iconic tableau.

On July 3, he spoke from a stage set that resembled a picture frame,  decorated with Navy stars,  and flanked by jumbo images  of American flags.  For added oomph, the Blue Angels flew by overhead.   It was a perfectly art directed segment of authoritarian theater;  Leni Riefenstahl would be impressed.

And Trump,  who went on about “angry mobs trying to tear down statues of our founders,”  clearly envisions himself  as one of the guys at top of the mountain,  a great man of American history.   But, really,  he was doing just what every selfie-shooting tourist to Mount Rushmore does.  With a simple trick of the camera,  a bit of forced perspective,  Trump juxtaposed his head (and Melania’s) with those of the giants,   demonstrating  not that he possessed the gravitas to be among them, but that he was just another rubbernecking wannabe.